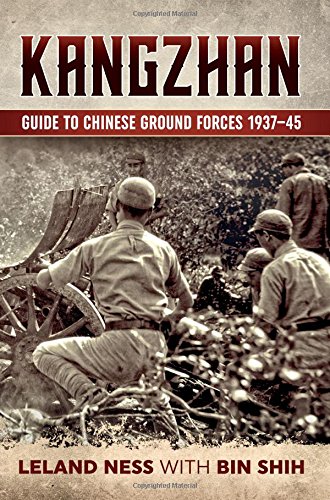 I’ve just finished reading Kangzhan, a guide to Chinese ground forces from 1937 to 1945, a book by Bin Shih and Leland Ness. Well, to be more truthful, I’ve finished reading some of it. It’s a solid book, coming in at 576 pages and weighing a lot more than you’d expect for its size, and I loaned it from the library. Someone else had it on order, but it’s so good that I’ll get my own copy to finish off the bits that were of less interest to me.

As far as I know, this book is unique in providing an English-language source of information on the organisation and equipment of the Chinese armies in the period between the two World Wars and in the Sino-Japanese War (Kangzhan – the War of Resistance – in Chinese) that formed part of the Second World War. While various sources give snippets and orders of battle, none have anything even remotely approaching the depth and detail of this book. Even better, its remarkably readable for the type of book and subject matter.

If you are a wargamer or historian interested in the Sino-Japanese War, it is essential reading. I’ve read pretty much everything on the subject in English that I could get my hands on over the last decade. Five minutes with this book told me more than all of them combined.

I’ll start with the Table of Contents so that you can get a feel for what the book covers. It’s a long list and I’d apologise for that, except that it shows just how comprehensive the book is!

In summary, the book starts with a section briefly outlining the history of the period, then moves on to a detailed look at the organisation of every part of the Chinese ground forces from the level of armies, down through various divisional structures, right down to the manning of squads. This is followed by a review of the weapons used, covering importation and manufacture. The appendices then cover orders of battle and strength reports. I’ll look at each of these in turn.

I must confess that this is one of the sections that I skipped over to get to the (to me) juicy bits. However, from what I did read of it, the section provides an excellent overview of the period with a chapter each on the Sino-Japanese War, the Chinese part in the Burma Campaign, and the guerrilla operations by both Nationalists and Communists in China. It serves its role as a quick introduction well.

For me, this was the gem that made the whole book worthwhile. Starting with the Northern Campaign against the warlords in 1928, and going through every organisational change thereafter, this section is stunning in its detail. Each organisation has either a divisional organisation table and a regimental organisation table, or just a regimental organisation table. These are supplemented by the text, some of which just reiterates what’s in diagram, but often times giving considerable detail as to the rank and role of the personnel at all levels, as well as noting components that were never (or rarely) formed and common (and uncommon) additions. The organisations cover the divisions in China itself (including the ‘German’ divisions, the American-equipped ones in China, the forces rebuilt in India for use in Burma, the forces sent from China to fight their way into Burma, the Communist forces, Warlord forces, militias and guerrillas of all types), non-divisional troops like artillery (yep, that’s right the divisions normally didn’t have their own artillery!), tanks, etc.

It was interesting to see just how lightly equipped the Chinese forces were. Many Chinese divisions had about the same number and type of weapons found in a single well-equipped Western battalion. Reading some of the examples of how the reality matched the theory just shows that even this low level was a struggle to reach and maintain, even with foreign aid.

I’ve copied some of the tables of organisation here for those wanting a snippet of the information you’ll find in the book.

The detail in the weapons section was almost as stunning as the organisation information and equally useful. The book goes through each type of weapon and looks at how many of each type were acquired from whom and when. It does this in quite exhaustive detail, talking about each shipment and production run, whether they reached their intended destination, and if not where they went. There are very few holes considering the huge variety of suppliers and manufacturers involved.

In the process it dispels a number of myths. For instance, the Germans did supply twenty 88mm anti-aircraft guns, but they weren’t the modern 8.8cm FlaK36 as popularly imagined. Rather they were old naval guns recycled for coast defence work. I was surprised to see how little German equipment the Chinese received (read that as purchased, they paid for all of it!), aside from the old WWI-era machine-guns and rifles that they manufactured themselves.

Likewise, the Soviet aid was much less significant than I’d expected. Most of it was old, worn-out equipment that the Red Army no longer had any use for, like their original production run of 37mm anti-tank guns and even some old WWI-era anti-tank guns. The artillery was of similar vintage and the machine-guns and rifles were supplied in relatively small amounts (and being in a non-standard calibre, were mostly issued to units far from the fighting).

What was equally interesting was where most of the kit that they did get came from. France and Czechoslovakia were major sources of machine-guns and other weaponry, far more so than Germany and the Soviet Union. Lend Lease aid only really had an impact on the corps being rebuilt in India, as the bulk of supplies to China didn’t start flowing until 1945, and very few Lend Lease equipped divisions were ready for battle before the end of the war.

The book also details China’s internal arms industry from its founding in the mid Nineteenth Century, through to the Nationalist period and the evacuation to Chongqing. Each arsenal has a section on its history and the weapons it produced, As the war progressed, they started turning out significant numbers of rifles, light and heavy machine-guns, and mortars of various calibres, although the quality left something to be desired.

This is another section that I didn’t have time to really get my teeth into, but I can tell you that it is worth the rather large number of pages that it covers. Some of the orders of battle are limited to just the divisions, their strengths, and which armies they are with, while others list the number of men and weapons of different types in some detail. This section ground truths the more theoretical organisation section, letting you see how it played out in practice.

What I Learned from this Book

Although my earlier reading had suggested that the Chinese Army was very lightly equipped, I was stunned just how badly off they were for weapons. Despite surprisingly large weapons imports in the 1930s (mostly purchased from Europe, the Soviet aid was a much smaller proportion than I’d been led to believe) and considerable local production (mostly of shockingly poor quality), the huge size of the armies involved meant that even thousands of a single type of machine-gun for instance was just a drop in the bucket, and far from anything but a local standard or a substitute weapon for reserve troops.

Take artillery for instance. Divisional artillery (other than a handful of regimental mortars) was just non-existent. Even army-level (an army is two-three divisions) artillery was patchy, with only a handful of armies having two or three 12-gun battalions, and many having none at all. Of course, things improved as local production ramped up, and many divisions received a company of medium mortars (or even a battalion!) as the Second World War progressed. Even then, their ability to use what they had was limited, and most artillery was either used over open sights or fired off into the wild blue yonder with only the most cursory and rudimentary efforts at ranging on a target.

Who Should Read this Book

There are two main groups to whom I’d recommend this book:

Where to Get It

You can buy the book from Amazon here.

I loaned this book from the Auckland Public Library (kudos to them for such a great range of interesting books!). Now, having read most of it (there’s a waiting list!), it’s on my Christmas list to get a copy for myself.

I wouldn’t recommend it as light reading, but it’s an awesome book and a great read for the type of book. I’ve been reading anything I can get my hands on about the Chinese Army in the Sino-Japanese War and World War II for quite a few years now. This is the first time I’ve actually seen any facts about what they actually had – and boy is it full of facts. If you are at all interested in the topic, it’s a must have book.

First Draft of Revolutionary Wars is Up!

This site uses Akismet to reduce spam. Learn how your comment data is processed.

Theme by Anders Norén — Up ↑